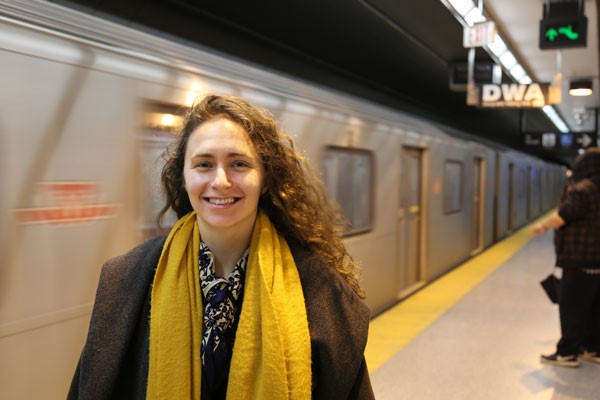 This story originally appeared at U of T Engineering News

The benefits of building public transit include reducing greenhouse gas emissions, relieving traffic congestion and expanding a growing city. Yet each transit project is unique, and predicting its future effectiveness is difficult. Professor Shoshanna Saxe (CivE) crunches the numbers on existing infrastructure to provide key decision-makers with a ‘reality check’ on the environmental and social impacts of today’s transit investments.

Saxe joined U of T Engineering in August 2016. Before completing her PhD at the University of Cambridge, she spent three years at a major consulting engineering firm in Toronto, working on projects such as the Eglinton Crosstown transit line and the Toronto-York Spadina subway extension.

“I love design, it’s amazing,” she says. “However, when you’re building things that people are going to use, you have to stay well within the limits of what you know for sure. I was curious about questions that we didn’t already know the answers to.”

During her PhD, Saxe conducted a detailed analysis of the London Underground’s extension of the Jubilee Line, completed in 1999. She gathered data on the greenhouse gases produced during construction and operation of the line, then used transit and land-use surveys to estimate the reduction of greenhouse gas emissions attributable to people using the line and living near it. By combining the two, she could calculate the net environmental benefit of that transit project.

“It turned out to be a bit of a mixed bag,” she says. “If you make some optimistic assumptions, you could say that it broke even in terms of greenhouse gas emissions around 2012 or 2013. If you are more pessimistic, you’re looking at a greenhouse gas payback of twice as long.”

Saxe says that the Jubilee Line extension sees approximately 175 million trips per year. On projects where ridership is low, the environmental payback period can be much longer. Saxe also studied the Sheppard subway line in Toronto, and found that with a much lower ridership it initially struggled to provide greenhouse gas savings. Over time, the Sheppard Subway Line has benefited from the decreasing emissions associated with electricity in Ontario. The results of the Sheppard Subway study were recently published in the journal Transportation Research Part D: Transport and Environment.

“If you’re at Don Mills station, and you want to go north, east, or even southeast, the network doesn’t serve you yet,” she says. “We still see people from that area driving 70 per cent of the time, so unfortunately there’s just a lot less opportunity for savings.”

Saxe says that her dream project would be to follow a major piece of infrastructure, such as a new transit line, from its conception through construction and use for 20 or 30 years — essentially throughout her career.